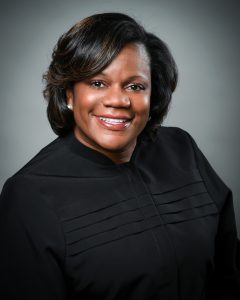 Judge Allegra Walker served as an Assistant Public Defender an Assistant District Attorney General before she was elected Justice of the General Sessions Court, Division IV, taking the bench in August 2014, where she is currently serving as one of three judges that preside over the court’s domestic violence cases, as well as presiding over Environmental Court. Judge Allegra Walker is the third woman of color elected in Davidson County General Sessions Court and is the third woman to preside over Division IV.

Judge Walker is a member of the Napier Looby Bar Association (past president), the Lawyers’ Association for Women, the National Association of Women Judges, and is an emeritus member of the Harry Phillips American Inn of Court, among other professional organizations.

She was awarded the Honorable Justice A.A. Birch Award for Outstanding Service by the Napier Looby Bar Foundation in 2015. Davidson County Democratic Women nominated Judge Walker as their ATHENA nominee in 2015 and was recognized by her alma mater as a Fisk University Women of Prominence in 2016. In 2017, she was recognized as one of 100 Influential African-Americans in Davidson County. Lastly, she was a recipient of the Tennessee State University Women of Legend and Merit Award in 2020 and was named a Woman of Influence in 2021 by the Nashville Business Journal.

Judge Walker has also been recognized for her prolific work in the community to raise awareness and education around issues of domestic violence, her work supporting and mentoring women and girls, as well as her work and engagement with a number of civic organizations.

Judge Walker is married and has a daughter.