Judge’s Biography
Judge Rachel L. Bell    is a third generation Native Nashvillan and proud graduate of Hillsboro Comprehensive High School, where she was a stellar basketball player. Judge Bell received a NCCA, Division I-Women’s Basketball scholarship to Auburn University and finished her collegiate career at The University of Memphis earning her Bachelor of Science in Education and her Juris Doctorate Degree from Cecil C. Humphreys School of Law.
In 2012, Judge Bell, was elected General Sessions Court Judge, Division VIII (8) and unanimously re-elected in 2014 to another term, with her campaign slogan: “Nashville’s Judge serving ON and OFF the bench, Ringing the BELL for Justice!! ” ™

In August, 2014, Judge Bell was elected by her peers to be the Presiding Judge over the Davidson County General Sessions Court for a one (1) year term and re-elected to a second term in August, 2015 to serve until September 1, 2016. Prior to her election to the court in August 2012, Judge Rachel was the Managing Partner of Bell & Kinslow, PLLC and Founder & COO of Pinnacle Title & Escrow, LLC with offices in both Bordeaux- North Nashville, West Nashville, Hermitage and Memphis, TN.

In 2014, the court started conducting Saturday Court Dockets bringing Expungement/Legal Clinics & Resource Fairs to the community. In 2016, the court expanded its reach by partnering with the TN Administrative Office of Courts and the TN Supreme Court’s Faith and Justice Alliance initiative for better access to justice. In 2016, Judge Rachel became the first active judge certified with the National Safety Council to teach Alive at 25. In 2018, the Court was awarded the United States Department of Justice/Bureau of Justice Assistance and the Center for Court Innovation, Community Court Implementation Grant, to receive technical assistance in launching the C.A.R.E. Diversionary Court, which focuses on Creating Avenues for Restoration and Empowerment for offenders aged 18-30. In 2019, Judge Bell birthed the Bordeaux North Community Justice Center, which is the designated space for the Music City Community Court and all of its programming. In 2021, amid the COVID19 pandemic, Judge Bell created another initiative named the L.E.G.A.C.Y. (Let Every Goal Achieve Continuous Yields) Housing Resource Diversionary Court & Program to assist landlords and tenants experiencing hardship and non-payment of rent. On the horizon is the C.A.R.E. LGBTQ+ Diversionary Court.

Throughout her personal and professional life, she currently and previously served on several boards such as Hands on Nashville, Davidson County Industrial Development Board, Juvenile Diabetes Research Foundation, (JDRF), Golfers Recognizing Opportunities for Women (GROW), Women in Numbers (WIN), Disciples Village, Nashville Black Chamber of Commerce, East Nashville Hope Exchange, Disciples of Christ National Convocation Board of Trustees and National Hope Partnership for Transformation Trustees and Board Advisor for Kaplan Career Institute. Judge Bell is also the proud founder of the Ring the BELL Foundation, Inc. and the co-founder and Board Chair/President for the Bordeaux-North Nashville Chamber of Commerce. 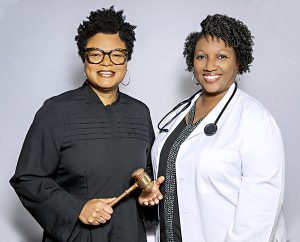 In 2017, Judge Rachel married her wife, Dr. Dorsha, an Emergency Medicine Physician, becoming the 1stopenly gay Judge in Nashville, TN. Judge Rachel and Dr. Dorsha are Co-CEO’s of Solutions NOW, Inc. and founders of myURGENCYMD, a telemedicine company and the “i am . . . just human.” movement. Judge Rachel cares deeply about equal justice and her mantra is, “Justice does NOT stop at the courthouse steps!“®

NASHVILLE, Tenn (WKRN) — The McGruder Center sits in the heart of North Nashville. For some, it’s a refuge, surrounded by violence.

For the past 3 years, violent crime has rocked Nashville’s North Precinct, with 77 homicides in that time. It’s a grim fact one judge is hoping to turn around.

On a normal day, when someone commits a crime, the process is generally the same. The person is arrested, appears before a judge inside the Justice A.A. Birch Building, the judge makes his or her ruling, and the process continues from there. However, a different kind of courtroom is helping to stop young adults from becoming repeat offenders.

“I have always known that North Nashville and parts of Nashville, had some serious issues that were dealing with lack of resources and opportunities and you know when you’re growing up in North Nashville you can’t help but know that there are some issues,” explained Judge Rachel Bell, Founder of the Music City Community Courtroom.

Judge Bell has served as a General Sessions Court Judge since 2012. Bell, a third generation Nashvillian, was re-elected to her seat in 2014 on the slogan, “Nashville’s Judge serving ON and OFF the bench, Ringing the BELL for Justice!!”

The General Sessions Music City Community Court, Division VIII (8) was founded by Judge Rachel L. Bell in 2012. Since its inception, the court has piloted several community initiatives focused on preventive and diversionary justice focused on the concept, that “Justice does not stop at the courthouse steps” and charged to do all it can to help break the playground (school) to prison pipeline and restore/rehabilitate lives.